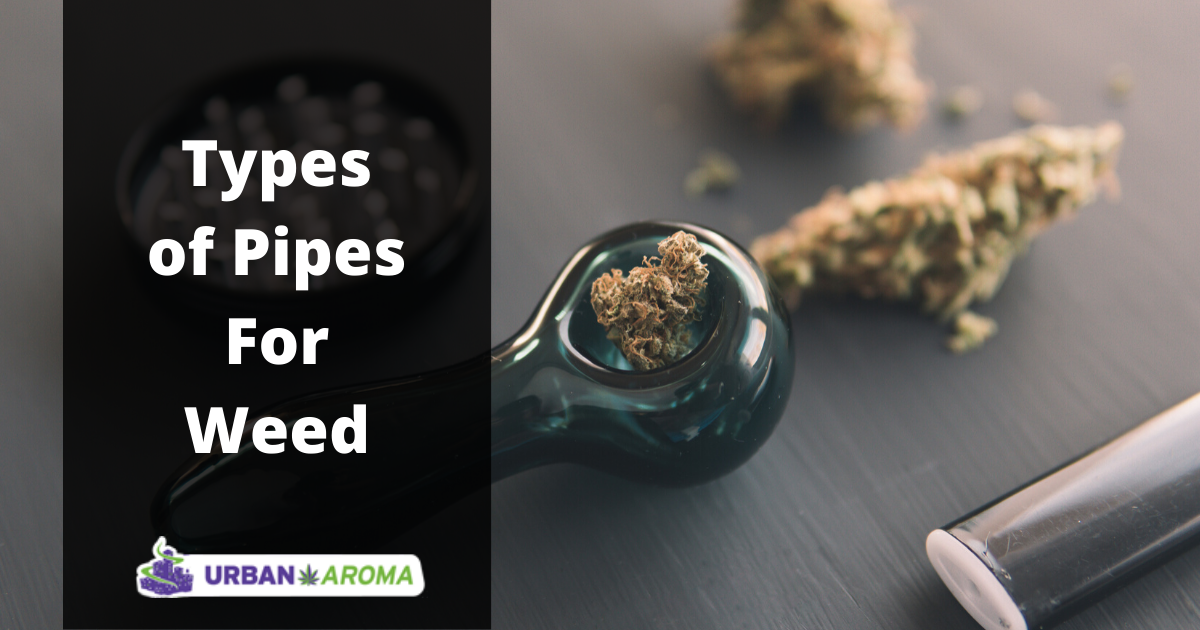 There are many different types of pipes used to smoke cannabis and hemp, but the majority fall into 10 different types, which we will cover below. Don't worry though, learning about the types of pipes is less complicated than purchasing weed in D.C. legally (Creative weed laws). But first, let's take a quick walk through the history of pipes and the materials they were made from, then you'll understand the types of pipes we have today haven't changed all that much from centuries gone by. Ready to get started? Awesome, let's fire one up and learn some cool stuff.

The History of Pipes

Pipes have been a part of humanity since we learned to control fire. The first confirmed pipes were found in the tombs of ancient Egyptians and date back to 2000 BC. What's most interesting is that archeologists don't know what purpose they served in that society. Ceremonial pipes have been used throughout history for both religious and other purposes, such as the American Indians using them with covenants or treaties, hence the name "peace pipes". While American Indians were using pipes for tobacco, India was using them for cannabis/hemp/hashish. Africans have been using them for who knows how long. Some archeologists have claimed that cannabis and/or hemp were used there for thousands and thousands of years and their pipes were made of huge gourds. Pipes are more modern now, but the materials haven't changed much over the centuries. But before we get to the pipes, let's dig into the different materials that modern pipes are made of.

What are pipes made of?

At the beginning of the history of pipes, most pipes were made from natural materials such as wood, clay, stone, reeds, bamboo, and other natural or organic material. Today, this mostly holds true except for glass and metal. Our ability to control and manipulate raw materials today gives us some nice features and advantages that most historical pipes could not compare to today. Let's take a quick walkthrough of the materials you'll find used to make modern pipes.

Glass - Glass is now the dominant material of pipes today due to Bongs and Rigs becoming so popular. Glass is also cleaner, easier to clean, and can be formed to hold water and other adaptors for different purposes. Bamboo - Although bamboo has become more popular over the last decade with the green movement, it's still not at the top of the list for making pipes. It does have a pretty strong cult following as easily seen on Etsy with loads of bamboo pipes. Wood - Wood has been used since the beginning of pipes. They are still popular today within the tobacco and cannabis smoking cultures across the globe. There are so many possibilities with wood because of the densities, grains, and colors of different types of wood. Harder woods can make a pipe last a very long time, give additional flavor, or no flavor at all. Options are many with wooden pipes. Metal - Metal made concealable pipes a reality. Like stone and clay, they can be very small and easily carried in your pocket. Smaller pipes made of metal can carry a loaded bowl that can be kept in a pocket or purse for easy access on the go. Clay - Clay, and stone are the OG when it comes to pipes. Humans have been making things from clay as long as humans have walked the earth. It's easily customizable with simple tools, which makes it easily decorated, easily accessible, and finished and cured with heat or fire, which is exactly what it will hold. Stone - While some stone is not well suited for holding fire or burning embers, many are a perfect fit for making pipes that can withstand the heat without shattering or cracking. They tend to last a long time, can be incredibly small, and can be easily concealed. Some stone pipes can also be exceptionally beautiful. 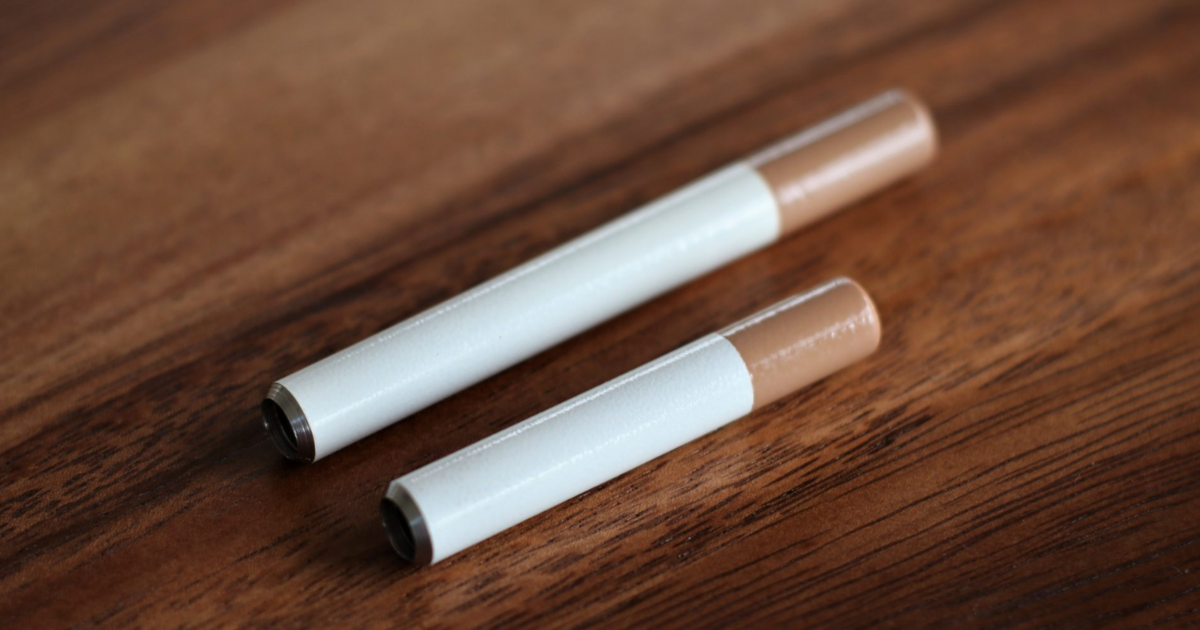 What is a one-hitter? A one-hitter is a cylindrical tube made from a host of materials that tobacco, cannabis, and other herbs can be placed in one end and used as a cigarette. It holds enough material for one puff or hit. One hitters can be made of stone, clay, glass, wood, metals, and even bamboo. They are easily carried in your pocket for that quick hit whenever you need it by simply stepping aside somewhere. Simply take a hit, exhale, place the one-hitter back in your pocket and continue on with your day. One hitters can be purchased as a single item, in multi-packs, and/or with a dugout. What is a dugout? A dugout is basically a case that fits in your pocket, houses your one-hitter, and allows you to carry up to a couple of grams of cannabis that's already ground. The area that holds the cannabis is usually "dug out" from inside a block of wood, with one hole drilled for the one-hitter to store and the larger one for your ground cannabis. To load your one-hitter, you press one end into the dugout, twist, and raise it out. A small amount of cannabis will be lodged into one end of your one-hitter. Just use it like a cigarette. Store it in the dugout until you want another hit. You can get the complete rundown on our post about one-hitters and dugouts. 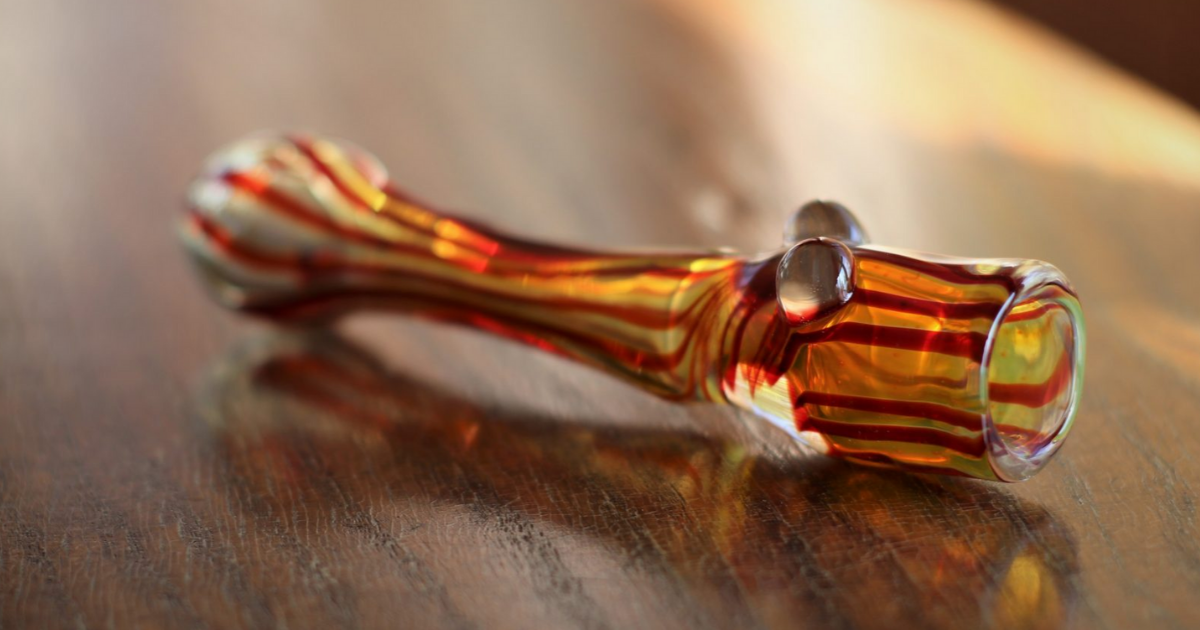 What Is A Chillum? A Chillum is a tubular/cylindrical pipe made of clay, bamboo and other materials, and dates back many, many centuries. They are to this day a significant part of the culture of India and other parts of the world. In the western world, you can find them made from almost all types of materials commonly know for making pipes. The most popular chillum pipes in the US are made of glass, but they're not the only game in town. You can find them made of fine woods, brass, metal, stone, and even bamboo. They range from the most simple to very large and elaborate pipes that are highly decorated. 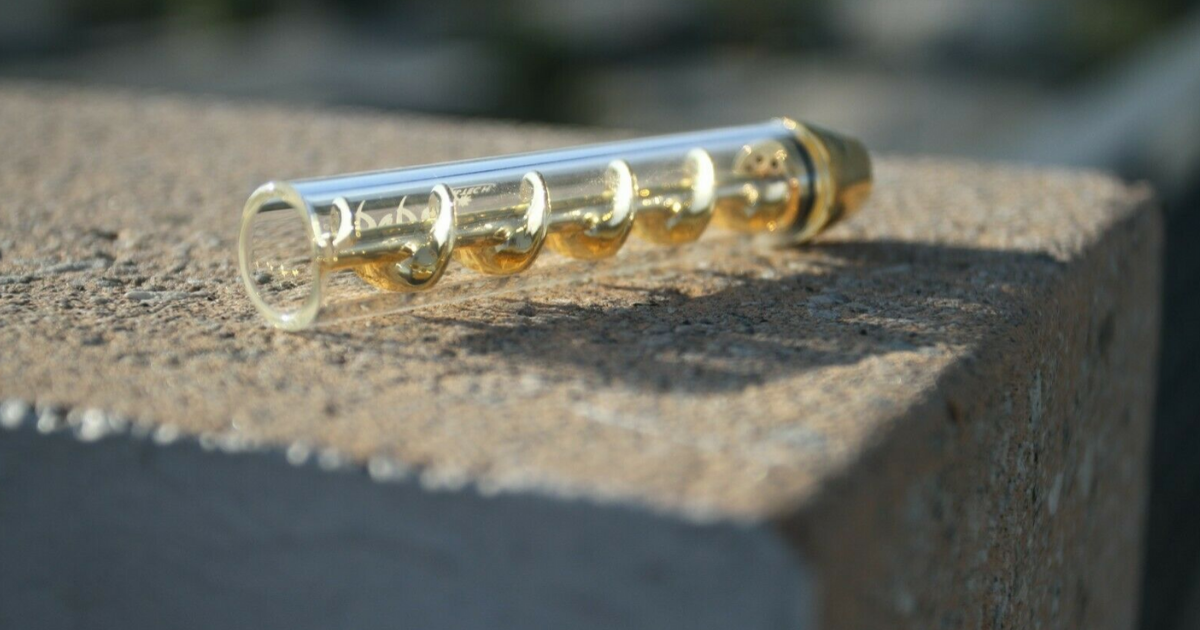 What Is A Glass Blunt? A glass blunt is made from a glass cylinder that's open on one end and has a mouthpiece attached to the other. The mouthpiece is usually attached to a small auger type of system. They can be easily carried in your pocket, taken out, fired up, and quickly put away. As you smoke cannabis, you simply twist the mouthpiece, which twists the auger, dumping the ash from the used, burnt cannabis, yet keeping the remainder of the unused cannabis safe and secure. They are perfect to load in the morning and keep with you to keep you going throughout the day. They're also great for small parties and get-togethers, a day at the beach, a day hiking trip, or whatever your favorite outdoor activities are. You can read our full article on glass blunts here. 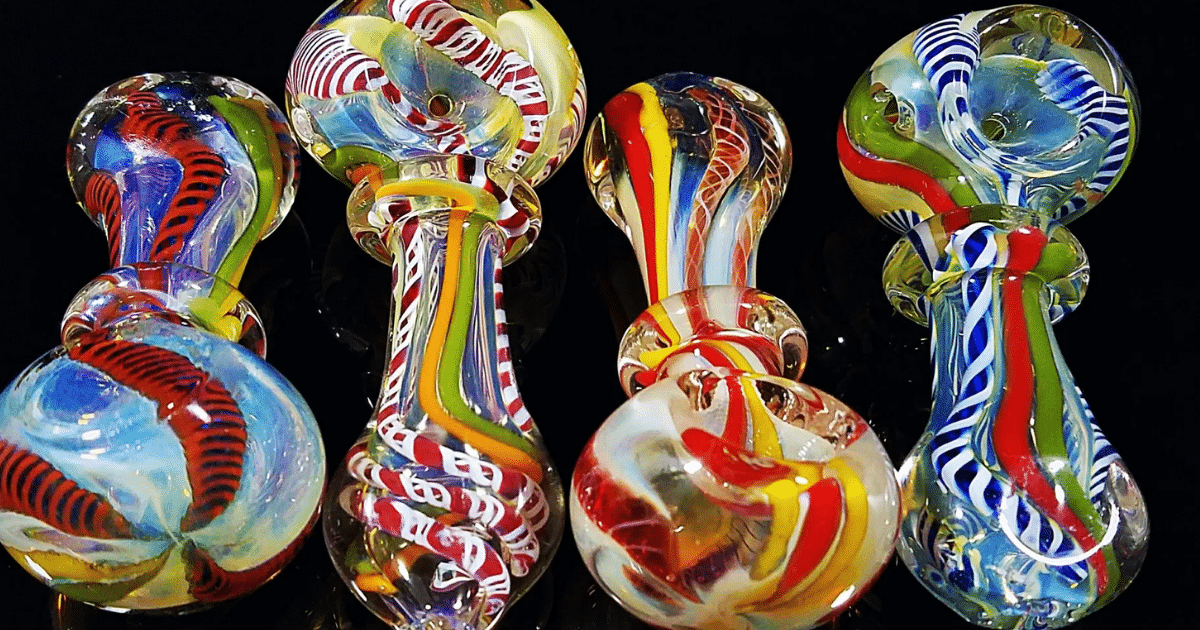 What Is A Spoon Pipe?Spoon pipes are pipes that are generally made from glass and when looking at it, sports the shape or outline of a spoon. They are likely the most commonly used pipes in the US and Canada. You can buy ones that change color, elaborate designs, and a variety of sizes. There are so many of these on the market that it's almost impossible to not find the perfect one for you. They are not easily broken, work well, take up little space, and are easily concealed. Another advantage is they are made of glass, and therefore easily cleaned. Just soak them in alcohol or one of the better solvents on the market. I place mine in a jar at night in Grundge Off, the next morning, just remove it, rinse it and set it out to dry. 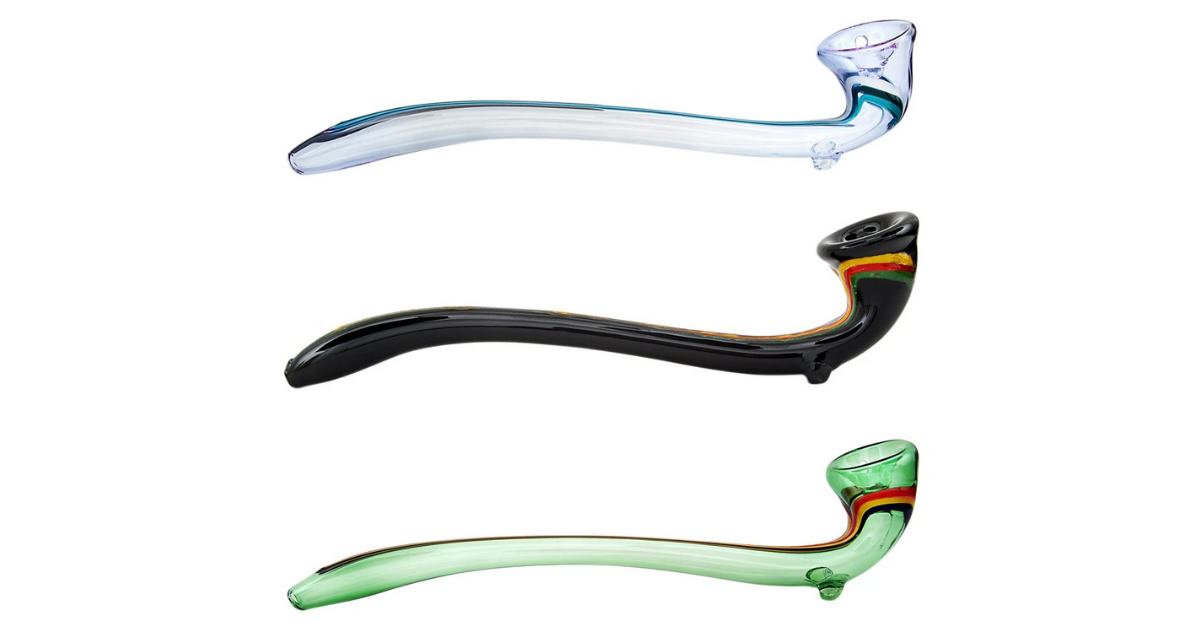 What Are Sherlock-style Pipes? Sherlock-style Pipes are a traditional style of pipe that has that all too famous "U" shape to it from mouthpiece to bowl. Although used primarily with pipe tobacco globally, its use with cannabis continues to grow. There are some absolutely beautiful pipes on the market, and the Sherlock style pipes hold a good portion of the most beautiful pipes in the world. 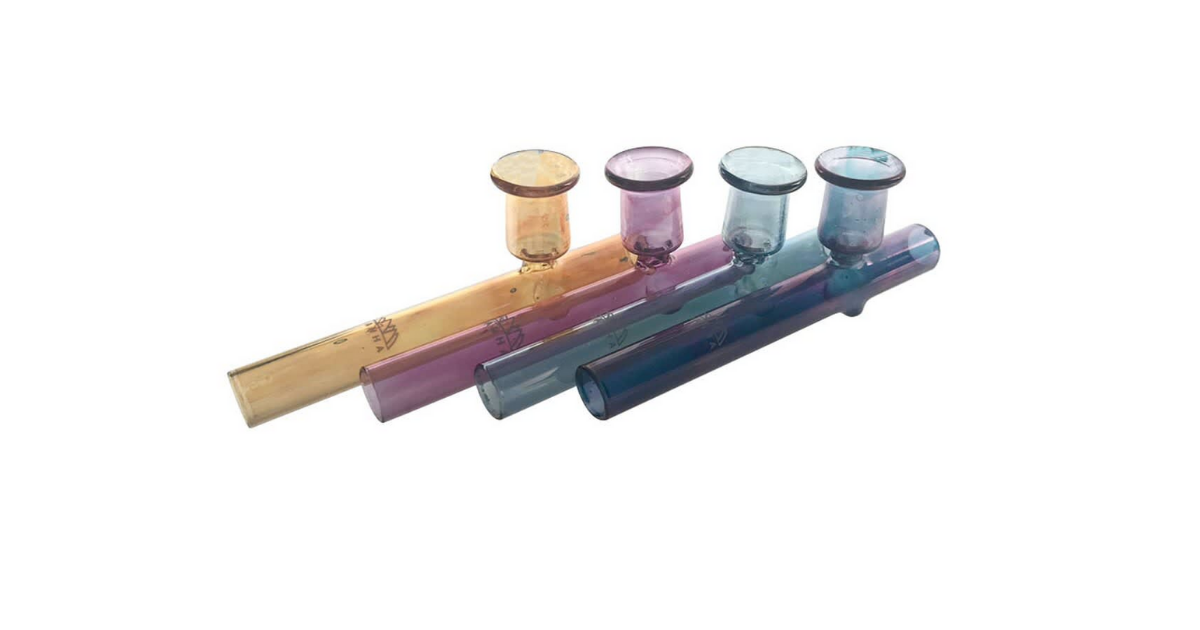 What Are Steamroller Pipes? Steam roller pipes are long, glass cylinders with a bowl on top and both ends of the glass cylinder are completely open. They are large blunt size or larger and are used for cannabis and hemp flower. A steamroller pipe is basically a smaller handheld dry bong that produces massive hits and rips. 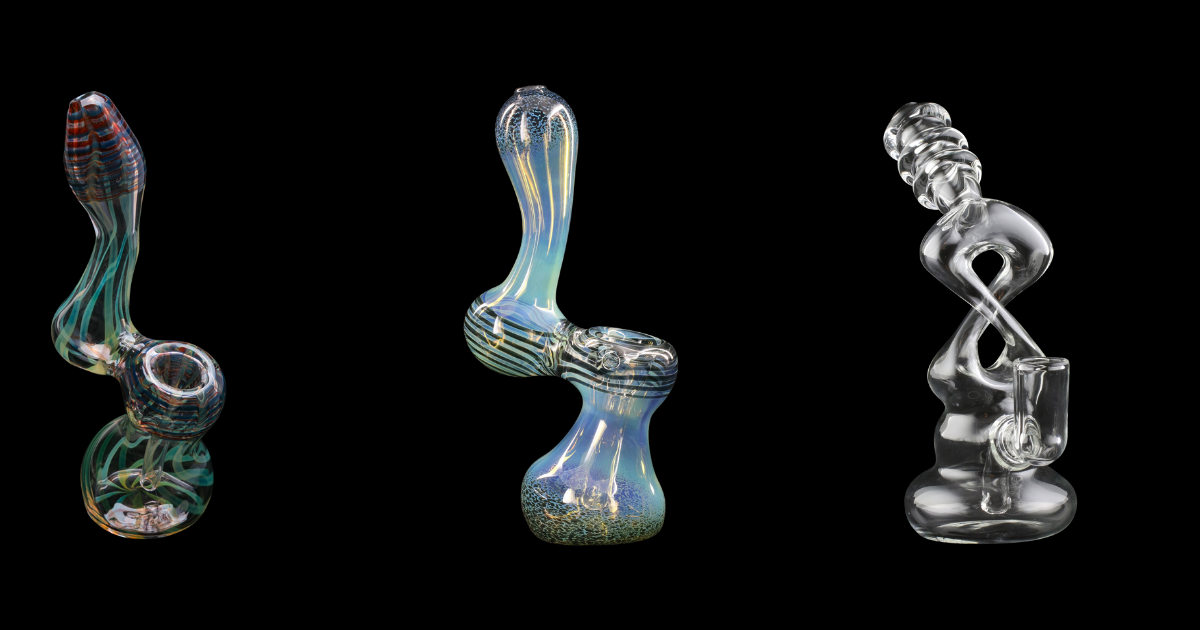 What Are Bubbler Pipes? Bubbler pipes are pipes that are usually made of glass, they are made to hold water, and place the mouthpiece and bowl on opposite ends of the water reservoir. The bowl usually has what's known as a stem that holds a bowl on the exterior, and penetrates the water in the bottom reservoir. These types of pipes include larger bongs, rigs, and smaller handheld bubbler glass pipes. There is a large variety of styles, sizes, and designs, but all carry the same basic design principles. These small bubblers are used for flower and other concentrates like hash and keif. 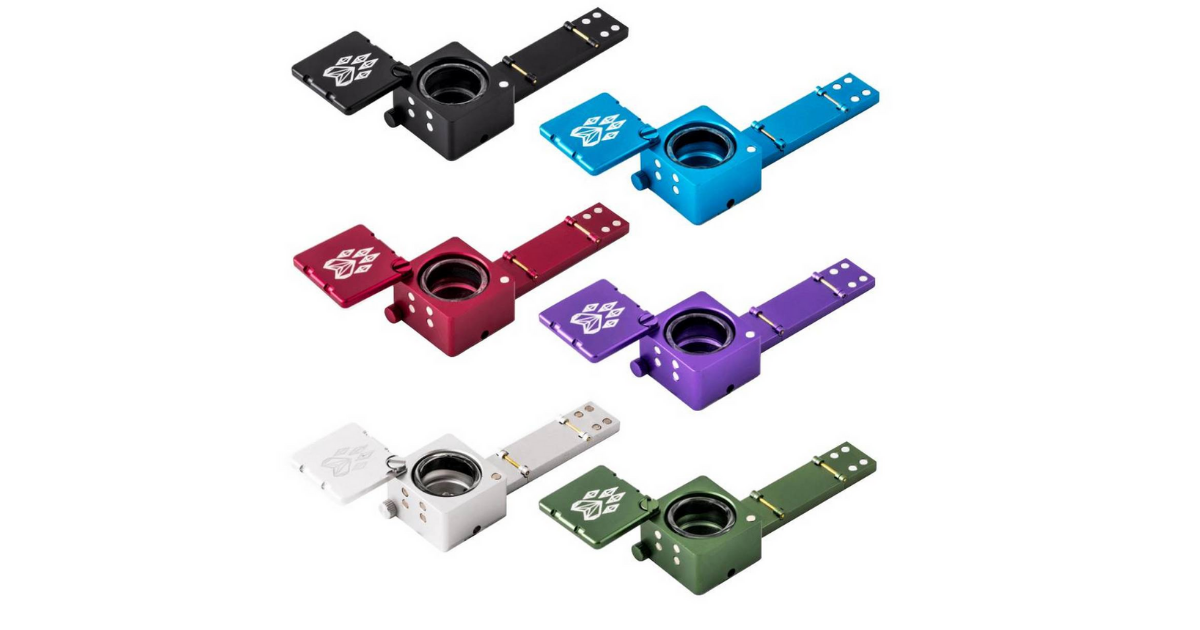 What Is A Foldable Pipe? A foldable pipe is a simple pipe that is designed to be able to convert from a small shape into a useable pipe in seconds, used, and returned to its former configuration quickly and easily once done. They are light, made from a variety of materials, and are easy to use. There are unlimited designs and options of size, colors, and other factors. 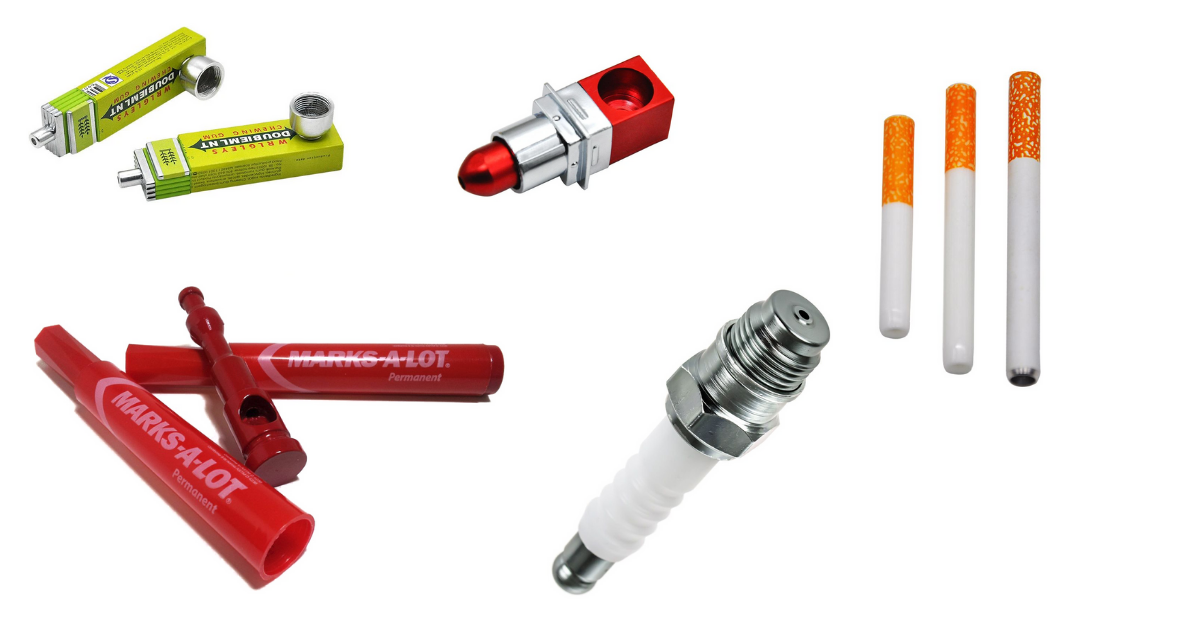 What Is A Stealth Pipe? A stealth pipe is a pipe that takes the form of something very common that is everywhere. They are pipes that are made to remain in stealth mode, or not recognized for what it actually is, which is a pipe for smoking cannabis. What do spark plugs, nuts, and bolts, belt buckles, figurines, Zippo lighters, bracelets, highlighters, lipstick tubes, or a pack of chewing gum have in common? Answer: They may actually be a stealth pipe. Some work better than others, some are better engineered and are quality, some... not so much. Consider price and reviews before jumping into these unless you just think it's cool. These are the coolest of all pipes from my perspective. It shows the creativity and wild imaginations of humans. We've now covered the most popular pipes on the market today for cannabis. We hope you can now take what you've learned, go shopping, and find your perfect pipe.