The shortest answer here is that while it varies based on dose and person, weed, also called cannabis or marijuana, can typically be detected in body fluids for up to 30 days after the last use.

But detecting cannabis ingestion and what the weed detection windows really are depend on how much you smoke or use and how often. Just like with other substances, more frequent use and higher doses are associated with longer detection times, and cannabis metabolites may be detectable in hair for several months.

Daily users of cannabis may have several months to wait after last use before metabolites are no longer detectable, as the longest-reported detection times are over 90 days.

But this is just a quick and dirty summary! In this post, we cover detection windows for cannabis in blood, urine, hair, saliva, and more. 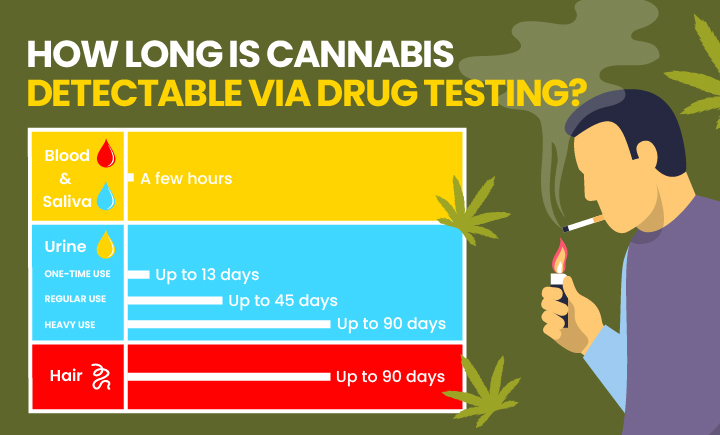 How Long is Cannabis Detectable via Drug Testing?

Drug tests measure pot and its metabolites, which are just by-products. These metabolites persist in the body far beyond the date of use. The details vary depending on the type of test.

Mayo Clinic Proceedings states that cannabis can be detected in urine for a window of time after last use that varies as follows:

Cannabis metabolites bind to fat molecules in your body as they are fat-soluble, which means they take longer to leave your system than things you “pee out” that are water-soluble.

Urine testing is the most common cannabis drug testing method.

Urine tests reveal only recent marijuana use, not current or ongoing impairment or intoxication. This is because it takes time to break THC down into the metabolites that are found in urine. These tests are often used by zero-tolerance employers to detect drug use in employees.

Blood and Saliva: Not as Common

Saliva and blood tests for marijuana are less common because cannabis remains in the bloodstream for a short time. But because blood or saliva tests may signal current intoxication, they may be used at roadside sobriety checkpoints and the sites of automobile accidents.

(However, there is a difference between a blood test for cannabis and a blood alcohol concentration test, which provides a level of impairment or intoxication. That is not possible with a cannabis blood test.)

Therapeutic Drug Monitoring explains that cannabis is typically detectable in blood for 1 to 2 days. Chronic heavy use increases the length of time cannabis can be detected, and in some cases, it may be seen after 25 days.

A 2014 review on cannabinoids in oral fluid found the compounds are detectable in saliva after last use as follows:

In jurisdictions where weed is legal, oral fluid may be used for roadside testing. (However, as mentioned above, this should not be confused with a breath test for alcohol concentration test, which provides a level of impairment or intoxication. That is not possible with a cannabis blood test.)

Hair testing can evaluate past drug use for up to 90 days. Cannabis metabolites travel using tiny blood vessels to reach the hair follicles, and small amounts can persist there as the hair grows slowly—each 1.5-inch segment of hair reveals about three months of past cannabis use based on average hair growth rates. This is most often seen with daily or near-daily cannabis consumption.

How Long Does it Take to Metabolize THC?

Typically, formal drug testing for cannabis involves an immunoassay test called the RIA or EMIT. Should either of those return positive results, the next step is gas chromatograph-mass spectrometer (GCMS) screening, which is itself much more accurate.

Today there are no substances that cause a marijuana urine test to come back with a false positive. In the past, ibuprofen could cause false positives for marijuana, but that does not happen on modern tests.

For these reasons, false positives are rare. If you do test positive and you are sure it’s an error, contact your doctor.

Can Cannabidiol or CBD, THC’s non-psychoactive cousin, cause a positive drug test?

CBD shouldn't show up on a drug test at all. However, because full-spectrum CBD products contain trace amounts of THC, it is possible that they can cause a false positive drug test, especially if you use enough. In certain rare cases, then using CBD could cause a positive drug test.

What Factors Affect the Timeframe?

The first type of factor includes such as your sex, metabolism, age, and body mass index (BMI). The second type includes frequency of use, hydration levels, and dose. More frequent and higher doses generally increase the amount of time it takes to metabolize the cannabis out of your system. First time marijuana users may eliminate it more rapidly, but daily users can expect it to last longer.

More potent cannabis with higher THC levels, including cannabis concentrates, may also be detectable for longer. Ingesting marijuana via cannabis edibles can also cause it to remain in your system longer than inhaling it.

Because they may have higher levels of body fat, women often metabolize THC at a slightly slower rate than their male counterparts.

Speed of metabolism will affect how quickly cannabis metabolites leave the body. Metabolism can be affected by physical activity, age, and certain health conditions.

A person’s size matters, because THC metabolites are generally stored in fat cells, fatty tissues, and fattier organs. This means a higher body fat ratio or BMI can mean a slower metabolism and excretion rate for cannabis.

Dehydrated people have higher amounts of THC in their systems. However, the idea that downing a ton of water will help you pass a drug test is mistaken; it is likely to dilute the results and command a repeat performance.

The way you consume your cannabis also impacts the detection window. Inhaling your cannabis, in other words by vaping or smoking your weed, lets it hit you faster and also go away more quickly. If you ingest cannabis in the form of edibles, the THC levels will drop more slowly as the body breaks down the metabolites and they leave your system.

How to Get Marijuana Out of Your System

If you’re subject to random drug screening, the only sure way to pass all of the time is to avoid using anything you’ll be tested for. Although a number of weed detox kits and remedies exist, none are what you can call reliable. Many involve diluting your urine, or masking dilution with vitamin B-12 or creatinine.

How Long Does It Take to Feel the Effects of Cannabis? 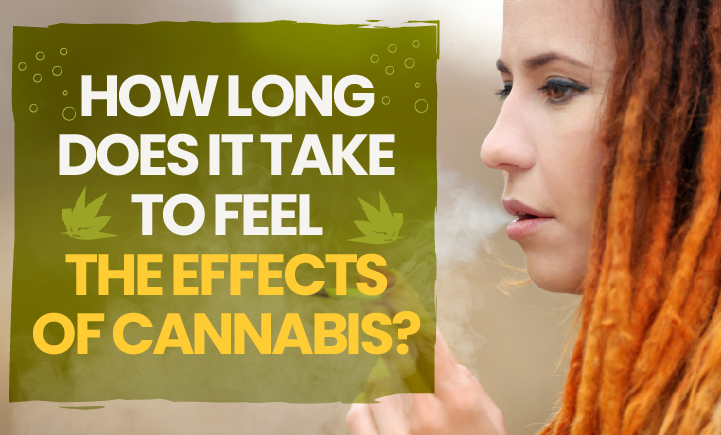 According to Healthline, the effects of marijuana have a rapid onset, usually within 15 to 30 minutes after inhaled use. When ingested, it can take one or two hours to feel the effects of cannabis.

The active ingredients in cannabis produce a short-term, psychoactive “high.” Common effects of cannabis include:

Other short-term side effects include:

In rare cases, high doses of weed can cause hallucinations, delusions, and psychosis.

Smoking or ingesting weed on a regular basis can have additional effects on your mind and body. You might be at an increased risk of developing:

Cannabis use during pregnancy or breastfeeding has been linked to a greater chance of problems with brain development or birth defects, yet research remains lacking in this area.

Although the effects of cannabis fade rapidly, its metabolites can be detected in the body for far longer. Many factors influence that exact amount of time.

Additionally, unlike standard prescription drugs and even OTC medications, cannabis products really aren't standardized. Depending on where you get them, they can and do vary considerably in makeup, quality, effects, and dosage.

This wild level of variation contributes to what cannabis effects users feel, and how quickly they are experienced. And remember, like anything else, THC can interact with other drugs including alcohol, and medications, so discuss the idea of marijuana use with a healthcare professional before getting started.

If There’s a Problem

If you find yourself experiencing actual withdrawal symptoms or otherwise unable to modify your cannabis use, you may be at risk for a substance use disorder. A mental health professional is the right kind of person to seek help from if this is the case. Look for someone specializing in talk therapy and cannabis use, if possible.

If you or a loved one want addiction treatment or are struggling with substance use, reach out to the SAMHSA National Helpline at 1-800-662-4357 for mental health resources, including information on drug abuse treatment facilities and other local support.

Cannabis can stay in your system for several days or up to several months after the last use. How long that period of time is depends on factors such as whether you eat or vape your weed, how often you consume it, and the drug test itself.

We hope this guide to how long weed stays in your system has been useful. If we missed any of the details or burning questions, let us know.